Preexisting conditions can influence a personal injury claim in some cases. When you are injured due to another’s negligence, you are obligated to prove that the suffered damages are due to the current accident. If you are in pristine condition when the accident occurs, challenges are few. However, for the vast majority of people, by the time they reach adulthood, the likelihood of preexisting conditions is higher.

Let’s look at preexisting conditions, taking into account their influence on a personal injury claim. Clearly, some prior conditions are less of an issue when trying to focus on a current injury, while others may add a hurdle to receiving full compensation. Your personal injury lawyer will devise a strategy to differentiate between current and preexisting injuries and show how an accident may impose new trauma that aggravates a quiescent preexisting condition.

What Is Meant by a Preexisting Condition?

This varies from one person to another. Some of us had a broken arm as children, others fell off a motorcycle or pulled a muscle playing tennis. Whatever the cause, the severity of the injury plays a prominent role in a personal injury case. If the prior injury healed without lingering complications, then the effect will probably be small. However, if the injury led to persistent arthritis that waxes and wanes, it might be targeted by the defendant’s attorney. The variable here is the ability of the defendant to argue that their actions are not responsible for your current symptoms.

Why Are Preexisting Conditions Relevant?

Let’s say that after an accident, the plaintiff noticed increased pain due to an old but previously asymptomatic condition that occurred years earlier. It could be argued that the old injury did not cause increased pain but that the aftereffects of the old trauma were aggravated by the current accident. An example of this could be a new femur fracture in a T-bone collision, aggravating a previous hip injury. In this case, the plaintiff might receive considerable compensation because of the current injury on a preexisting condition.

A preexisting condition is an umbrella term that covers many types of injuries. Some of the most common are those that target old orthopedic injuries. For instance, a herniated disk that healed on its own after an earlier accident may not pose a lingering aftereffect. Yet, an impact to the spine during a subsequent accident may aggravate the herniated disk and cause pain. Other frequently seen types of preexisting conditions are:

Individuals who have been injured in the past are considered vulnerable to subsequent injuries. This is called an eggshell doctrine and means that the defendant is responsible for all the injuries the plaintiff incurs, even those due to his/her vulnerability. If used in a personal injury case, the doctrine provides needed protection for a vulnerable plaintiff.

Legal Assistance Is a Necessary Component of a Personal Injury Case 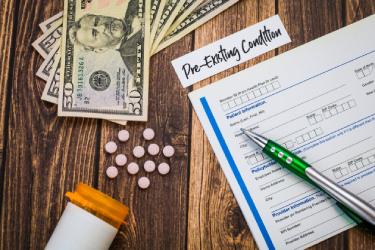 An experienced attorney can be of considerable help when you suffer issues with preexisting conditions. Insurers often try to use methods that will lessen the amount of money they pay.

One of these methods is blaming your pain on a preexisting condition. To do this, they will often request your entire medical file, so they can find a previous injury to use.

Your injury lawyer will help eliminate this tactic. In addition, if a preexisting condition was worsened by a current accident, your lawyer will use the eggshell doctrine to make sure you are fully compensated. Insurers often try to say that the current injury did not exacerbate a previous condition. Your attorney will dispel this false ploy.

The injury lawyers at The Platta Law Firm will help you obtain the compensation you deserve. They will weed out false claims and ensure the insurance company treats you fairly. If you are injured due to another’s negligence, call us at (212) 514-5100 or contact us online to schedule a free case review. We will answer your questions, examine your case, and give you your options moving forward.