Driving at night is harder for many people, yet others prefer the lack of heavy traffic that comes when the sun sets. It’s true there are pros and cons for both times of day, but the fact of the matter is that more accidents happen at night. The National Highway Traffic Safety Administration says that there are three times as many accident fatalities after dark. Let’s look at the main difference between the two and learn about the driving modifications and the ways that you can stay safe.

The most obvious problem is the night driver’s diminished view of the roadway. That happens when the wide-angle view a motorist enjoys during the day is exchanged for the narrow path illuminated by headlamps and street lights. Since roughly 90 percent of a motor vehicle driver’s reaction time is due to visual stimuli, it is small wonder that more accidents happen after dark.

Likewise, depth perception, color vision and even peripheral views are limited at night. Without these stimuli, a driver is at a greater risk of having an accident. In addition, visual acuity lessens with age as does the ability to see in the dark. In fact, night blindness is common among those 50 years of age or older.

What Are Other Problems Drivers Face at Night?

Other issues with illumination at night are the blinding effect of approaching cars up to 3,000 feet away and subsequent glare. It can take up to two seconds for your vision to revert to normal. When you are driving at 40 mph, your vehicle can travel roughly 120 feet before your vision clears.

Things you can do to help are: 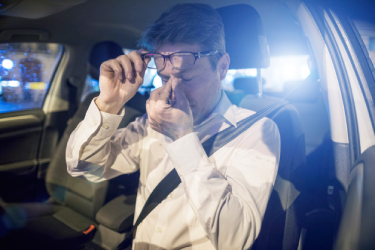 About 4 percent of drivers even admit they caused an accident because they fell asleep. This hazard is verified by the NHTSA,

which reported in one study that most accidents occur between midnight and 2:00 am, 2:00 and 4:00 pm and 4:00 am to 6:00 am, corresponding to times when drivers suffer from the most fatigue. In fact, missing two hours of sleep equals the effect of having three beers.

Ways to Counter Fatigue on the Road

The following suggestions may help counter the effects of drowsy driving:

Some of the other problems nighttime drivers face are: 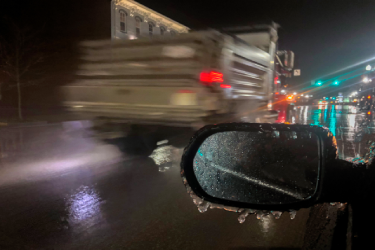 Just as passenger cars are involved in more accidents at night, so are trucks. The biggest problem is that at night a truck may be mistaken for a smaller vehicle from behind.

Studies have shown that drivers are unable to judge the size of a truck on a dark highway. One way to eliminate this hazard is for the trucker to use reflective tape or lights on the top and bottom

of the vehicle. This should be done along the back of the truck and on the sides, so passing or oncoming vehicles know that there is a truck ahead of them.

Truck accidents such as underride crashes are especially dangerous for those in a smaller car or light truck. When the driver to the rear does not realize the size of the vehicle, it is possible for the passenger car to slide under the truck in a rear-end accident. This often causes decapitation to those in the smaller vehicle.

If you are injured in a nighttime accident, it is important to gather an evidence-based history of the collision. At The Platta Law Firm, we send our investigators out to the scene of the crash to determine liability by using accident reconstruction techniques. We also examine the vehicles to determine if proper safety measures were used. Reach out to us at (212) 514-5100, or contact us online to set up a free case review. Let us take care of the legal aspects of the case and deal with the insurance company while you heal.